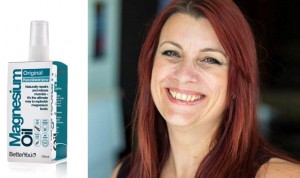 Better You, suppliers of Magnesium Oil Spray, reported that a 43-year old mum of one from Bristol, who suffered from frequent painful migraines for almost a decade has found relief thanks to BetterYou™ Magnesium Oil spray.

Here, Leah Jefferies explains how using our Magnesium Oil spray has ‘changed her life’ for the better after she took part in a trial aimed at better understanding the beneficial effects that magnesium can have on migraines with BetterYou and Migraine Action.

•  Leah was one of the participants in the three month trial which involved 68 migraine sufferers using BetterYou’s Magnesium Oil Original spray twice a day
•  Leah noticed a significant improvement in the severity and frequency of her migraines, which impacted both her general health and wellbeing and performance in work
•  The trial showed that overall half of the sufferers felt that the magnesium spray had a positive effect on their migraine experience
•  Of these all sufferers experienced a decrease in the overall severity of attacks
•  70% of these also experienced a reduction in the duration of the attack.

Leah says: “Over the years, my migraines had become noticeably more frequent (up to four a month) and had started to impact my everyday life.

“Every month there would be several days where I was incapacitated and unable work. I couldn’t drive, or even speak over the phone, I was in so much pain. I was paranoid I was letting people down, and on the whole pretty depressed as I was also missing out on many occasions including a friend’s wedding.

“My symptoms were severe and included sickness, light sensitivity, and blinding pain in my eyes, across the top of my head and into my neck. I would start to feel drowsy and my eyesight would get hazy before an attack. If these symptoms started on a Friday evening, I would not surface until Monday morning – sometimes longer. The post migraine symptoms included dizziness and feeling weak.

“I jumped at the opportunity to take part in the trial using the BetterYou Magnesium Oil Original spray. As time passed the frequency of my migraine attacks began to decrease from being frequent and sometimes weekly – to one every three or four months, which is a huge improvement.

“The pain severity halved and the attacks were significantly shorter. Normally I would be bed ridden for at least a couple of days, but by the evening after resting for the day, I felt fully functional again.

“Overall my general health and wellbeing and performance in work has improved, and I feel a lot more confident. Now I just panic if I am running low on BetterYou Magnesium Oil Original spray! I even keep a handbag size in case of emergencies.

“If it wasn’t for this trial and realising the benefits of BetterYou Magnesium Oil Original spray, I am sure I would now be treated for depression as well as the migraines I endured. I would go as far to say that this product has changed my life, and I use it daily without fail.”

It is estimated that 25 million school and work days are lost to migraines every year with 8 million UK sufferers.

Rebekah Aitchison from Migraine Action said: “There is currently no cure for migraine, but there are options in managing this neurological condition. Taking control of your migraines, in which headache may be one of a number of symptoms or not present at all, is key in reducing its impact on everyday life. With 1 in 7 people across the UK affected, and an estimated 190,000 attacks occurring every day, it is vital that we are able to help more people just like Leah.

“ We are absolutely delighted that Leah saw such fantastic results in reducing the frequency and severity of her migraines, thanks to the help of BetterYou Magnesium Oil spray.”

Studies have consistently indicated that migraine sufferers typically test poorly for magnesium levels and that treating the deficiency can possibly alleviate certain symptoms.

Over the last hundred years our average daily magnesium intake has reduced by 50 per cent, with a current estimated level being 170mg per day – much lower than the recommended daily allowance of around 350mg.

Karen Watkins, Nutritional Therapist at Mineral Check, said: “The laboratory has been checking mineral levels of tens of thousands of people for many years, and it is rare we see someone with optimum magnesium levels. In fact, on occasions where someone has good levels of magnesium in their system, we find it is often only because they have been taking a good quality mineral supplement.

“This is demonstrated with the results of Mineral Check’s mineral hair sample tests, which show more than 80 per cent of thousands of results having low levels of magnesium. This is also mirrored in the government funded Diet and Nutrition survey, which says that 80 per cent of the UK population are magnesium deficient.”

Magnesium is a mineral that is difficult to supplement through traditional oral means. As it is a natural relaxant, too much in one go can have a laxative effect.

BetterYou is currently leading a world-first absorption trial with Northwick Park Hospital to identify if spraying magnesium onto the skin can correct low serum magnesium levels in patients with small bowel stoma.

The results of this trial with Migraine Action are invaluable to our ongoing campaign to raise awareness about magnesium deficiency and its links with migraine.