4 fundamental nutrients you need this Veganuary!

On average, vegans live three and a half years longer than omnivores and one in three people are now stopping or reducing their meat consumption.

However, when cutting out food groups, it is essential to uphold nutrient levels for optimal wellbeing.  As it can to be difficult to obtain all the nutrients the body requires from a plant-based diets, deficiencies in vitamins D and B12, iron and iodine can be increased, and vegans may benefit from supplementing with a tailored multivitamin.

Regulating the intake of calcium, phosphorous and magnesium, vitamin D is essential for the formation of healthy bones.  However, the best food sources of this vital vitamin come from animal products such as beef, eggs and cheese so those following a plant-based diet are more likely to require support in topping up their levels.

Similarly, iron is predominately found in animal-based foods and it is vital for combatting tiredness and fatigue due to its support in transporting oxygen throughout the body.  While vitamin B12 is also critical for supporting energy levels and reducing tiredness, it is not found in any plant food, unlike some B vitamins, which can make it difficult for vegans to get the necessary amount.

An elevated risk of iodine deficiency also exists for plant-based eaters.  This is because the amount of iodine found in plant foods is inconsistent and depends on how much of the nutrient is in the soil the plant is grown in. 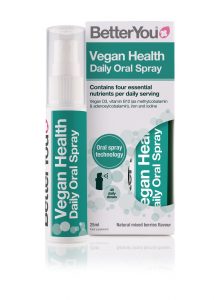 BetterYou is committed to delivering innovative supplements that cater to specific needs and their Vegan Health Oral Spray has been specifically formulated with scientifically substantiated levels of these four fundamental nutrients needed to support those on a vegan diet.

Aligning with the brand’s Better Planet Project, the spray – which has a natural mixed berry flavour – is contained in a bottle made from recycled material including ocean waste plastic and post-consumer recycling (PCR).