Take a look at A.Vogel’s herbal remedies for colds and flu symptoms and mild stress this January.

Unfortunately colds and flu can occur throughout the year, but the winter conditions certainly seem to give them a free pass to invade your immune system, what with the drop in temperature, cold winds and influx of rain and snow!

Make yours a cold and flu free season by choosing A.Vogel Echinaforce.  This range is produced using extracts of freshly harvested, organically grown Echniacea purpurea herb and root, picked fresh and used within 24 hours of harvest, meaning it has a higher quantity of active substances in it.  A.Vogel Echinaforce is available in many different forms including Drops, Tablets, Spray, Chewable Tablets and Hot Drink! 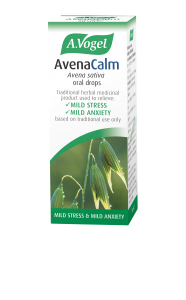 Most of us feel nervous at various times, but anxiety can become an on-going state.  For example after a period of worry that resolves but leaves a residual feeling of nervous tension.

If you are facing mild stress and anxiety try A.Vogel AvenaCalm Avena sativa oral drops, a traditional herbal medicinal product used for the temporary relief of symptoms associated with mild stress such as mild anxiety and to aid sleep, based on traditional use only.

AvenaCalm is made from the green leafy parts of the oat plant (rather than the seeds or oat grain).