View Basket “Solgar Quercetin Complex Vegetable 50 Capsules” has been added to your basket. 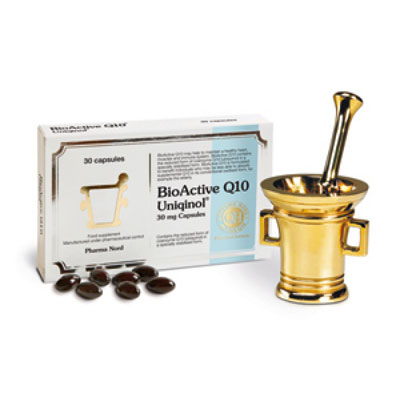 BioActive Q10 is a new product containing coenzyme Q10 in the reduced form, ubiquinol.  Coenzyme Q10 occurs within the body in two closely related chemical forms, oxidised (ubiquinone) and reduced (ubiquinol).  Until recently, coenzyme Q10 supplements were only available in the oxidised form as ubiquinone.

Most people are able to absorb supplemental coenzyme Q10 in the oxidised ubiquinone form.  However, certain categories of people may be less able to absorb this form of coenzyme Q10.  These include the elderly, as well as people with liver disease, pancreatic disease, digestive disorders such as IBS, and following digestive tract surgery.  For such categories of people, coenzyme Q10 is more easily absorbed in the reduced ubiquinol form, as BioActive Q10.

There is evidence that dietary coenzyme Q10 must be reduced to ubiquinol within intestinal enterocytes prior to release into the lymphatic system, and that this may represent a rate-limiting step for coenzyme Q10 assimilation.  Dietary coenzyme Q10 supplements containing ubiquinol avoid the necessity for this coupled absorption/reduction step, which may explain their increased bioavailability.  Comparison of corresponding dose/plasma levels from several studies indicates the bioavailability of ubiquinol to be several-fold greater than that for ubiquinone.

There are no reviews yet.